Gambling: The sure way of getting nothing from something.
– Wilson Mizner

So this weekend was there was an impromtu ski weekend in Ellicottville, NY. it came about with me inviting AJP and myself to Jesse's condo for the weekend.

we arrived shortly after 11pm on frida and had a few drinks. with Jesse telling us that we'd be up at 7:30 to hit the slopes at 8:30 for the first run...a little slacking took place but we made it on the lift by 9am. morning skiing is so awesome. it was perfect conditions and then around noon the sun came out and the clouds disappeared! 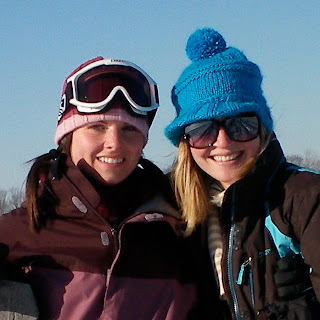 here is a picture from last year at Holiday Valley 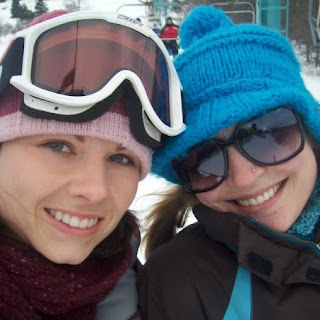 The skiing was awesome. but most importantly was the company. 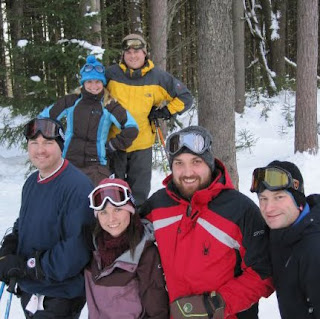 after a full day of skiing and some drinking a nap was in order. it was awesome. i woke up to all the guys yelling at the tv cause of some stupid call during an NFL playoff game. plans were being finalized and jen and i got ready to hit up Kramers outdoor hot tub.

i've only been in an outdoor hot tub once...back in highschool...for new years eve...don't look into it. but this time it was fabulous. we had some Yeungling and Coors, Fitchko and Kramer had their cigars and we all had the clear night ski above us.

after all that awesomeness we still needed to get ready, eat and hit up some local bars. We started at Cadillac Jacks...i was so dehydrated i almost went home and back to bed. but after a few tall glasses of water and everyone making fun of my ID picture i was quickly put in a better mood. Oh, and lets not forget about the Crown Royal bag the bartender gave me. SCORE!

After CJ's we headed over to Mulligans where we dance, requested songs, did shots, played pool and judged people and their outfits. its now 2am and the bars are closing. we need a cab. but not to just drive back to Jesse's, oh no. its now officially time to go to the Casinos. Seneca Casino, on an indian reservation.

Casino? CasiYES! we got a cab to take us there and he promised to pick us up at 5am. 5am! so we get there and AJP and i kinda learn to play craps. we get to throw the dice and lose Kramers money. all the while drinking for free.

that is until 4am comes around. they stop serving at 4 on saturday nights/sunday mornings, and don't start again till noon. So, having drank and slept most of the day, what does one do when there is no more booze? sleep some more. yep.

that's right, i plopped my but right on the ground next to the craps table and closed my eyes. funny how you get yelled at for eating in the casino, but not sleeping...at least not until i woke up and they made me move. so me, jen and captain walked around the casino waiting for 5am to come around and for our cab to show up...well lucky for us he did show up...at 5:30ish. i slept the whole ride back and then went straight to bed thinking how i had a 3 hour drive ahead of me in a few hours.

i woke up surprisingly not hungover and jen and i were on the road by 1pm.

it was an awesome trip and we had a ton of fun. it made us that much more excited for Colorado, which is 6 weeks away!!!!

Jesse, please invite us back.
CLE, i'm really worried about having casino's here, mainly because i'll want to spend all my friends money.

Do you ski? board? how far have you gone east/west?

PS. i didn't not come up with Casi-NO, Casi-YES. so i must not take credit.

The secret to staying young is to live honestly, eat slowly and lie about your age.– Lucille Ball

First off i want to wish Jenn Vojta a Happy Birthday! (Even though it was last week, it is now forever in cyberspace).

Her actual birthday was Wednesday, January 6th. and let me say, i was not a happy camper on Thursday. We started with a happy hour at D'Vine wine, where on Wednesday's they have 1/2 price flights of wine. after about 10 of us got 2 flights each the crowd started thinning. Only 4 remained. Me, Jen Page, Sara and the birthday girl.

What are 4 girls going to do downtown in the middle of the week with tons of wine swirling in their heads? Go to Nauti Mermaid of course!

We got some booze, food and more booze. we played songs on the digital juke-box. and we celebrated. but the night wasn't just about JV's birth. we also go to celebrate Sara's new adventure...she got a new job at Chartreuse. we are all super excited and happy for her, but i can't help but feel selfish and wish she were staying at Adcom.

We've be pod-mates for so long now, i will be sad and lonely when she's gone. still i wish her nothing but the best! Chartreuse is probably the most perfect fit for her!

so with being a week behind in my blogging i'll be skipping the crazyness that was saturday, better yet you can read what The Plum wrote about JV's saturday birthday celebration!

i hope you have a great and safe weekend. i'll be skiing my brains out at holiday valley this weekend!

(PS. another special happy birthday to Jenna, my little sis who just turned 19. enjoy it!)

letters for the new year.

Cheers to a new year and another chance for us to get it right.
– Oprah Winfrey

Dear Downtown YMCA members: if you're using the treadmill to walk and your NOT using an incline, please get off so i can run my 5k. kthnxbai.

Dear Harry Potter 7: i can't wait to finish you. you complete me.

Dear World Peace: Be somebody.

Dear New Sewing Machine: i know your still in the box, but i'm going to jo-anne's tonight to get supplies for you.

Dear LeBron James/Cavs: please please please bring a championship to Cleveland. i promise not to go to any more games, as you tend to lose in my presence.

Dear Bank Account: please stay full of monies as i have numerous trips to go on this year.

hope you all had a great, fabulous and safe new years!