**phew** that skills test was hard! (twss)
I do want to brag about being this tough chick on skates, but instead i'll brag about something else... 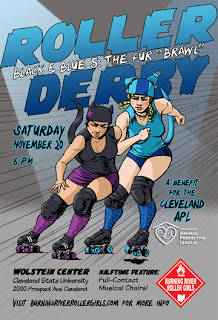 our official After Parties (YES, two!) are at the Old Angle and Garage Bar in Ohio City!


you can buy tickets on line here or buy them at the door. Part the the ticket sales will go directly to the APL!!!
Don’t forget to dig up a little extra “scratch” for the BRRG mother lode of raffle baskets, featuring Cleveland Brown’s tickets, BRRG 2011 Season Passes and much, much more! Raffle tickets are always three (3) for $5 or an arm span for $20. Contents and prize value will be announced at the bout.
i really hope you can make it...not just to support the furry critters of the APL but the totally rad chicks that make up the Burning River Roller Girls! and if you don't know what team to cheer for, just pick the Blue Blood Hounds! that's the team i'm representing!!!
see you Saturday!!!
Your Truely,
LuLu
Posted by lara at 9:27 AM 1 comment:

If you don't know where you are going, any road will get you there.
– Lewis Carroll

besides being so busy at work, packing for my move to Ohio City and Roller Derby i've missed out on some good ol' hang-time with my loves.

i miss all my friends. AJP is at her new job, JV is in Tremont, Jess is getting ready for her wedding, Shibani even designed a new blog that i didn't even know happen till yesterday! and all my other friends (yes i have more than 4) i have no idea...my weekends have recently been sucked in to family events...which is fun, but, hello, i need to drink with my friends and find out what's going on with them! and facebook will only get me so much information.

so to all my friends that miss me, i miss you just as much. but have no fear. i'll be planning an awesome house warming party. in the mean time please feel free to facebook stalk me.

have a great weekend.
Posted by lara at 9:19 AM No comments:

how i met your mother

this post wont be as funny as the tv show, but two weekends ago Karate Jon and i drove 8 hours to Delaware...the state.

it was our first solo vacation...i wasn't nervous about meeting the mom, his sister, or some friends...i was nervous about the drive. 8 hours, next to each other...no where to go. the last time i spent 8 hours in the car was with Alexa and AJP on our way to DC for the 1/2 marathon. it. was. scary. as. HELL! mainly cause Alexa wouldn't stop texting and twit-pic'ing. i'm pretty sure she wrote a blog while driving.

anyways. i was nervous for no reason. i know jon is a good driver. i slept some, drank some red bull, read and napped some more. i even drove through part of PA, or was it maryland?

we stayed at his brothers house while they were at a beach house for the weekend. it was great. the comfort of home without the stress of other schedule's.

Delaware is a pretty awesome state. i wasn't a fan of all the driving. it seemed like every place took 15-20 minutes to get to. which isn't bad, but i couldn't get my bearings for the life of me. it's very pretty and green and everyone is SO NICE.

we went to Spencer's Market. like a 1/2 breed West Side Market and a Flea Market and mix in some Amish Cooking. it was so fun. i bought some jewelry and pins for my bike bag...actually jon bought them...i had no cash.

his mom is adorable. she's this tiny little lady who has a lot of pep...she's an awesome cook...i wonder where he gets it...i only wish i could've spent more time with his TWIN sister. she had a hectic work schedule...

yeah. jon is a twin. maybe next year i can get her to come to twinsburg for some twins days action. all the Delaware friends i met were down right awesome. they should come to CLE and visit if they get the chance.

anyways. dinner, beach, shopping, eating, drinking and more driving. it was an awesome weekend and i hope to be invited back.

oh, and i think i need to start following the Fighting Blue Hens...i just need to find out what sport they play.
Posted by lara at 6:03 AM 3 comments:

Seven out of 10 American's are one paycheck away from being homeless.
– Pras Michel

so you need to hear about my awesome weekend in Delaware (the state)...but that's going to take a hot minute to write.

in the mean time i want to write about a quick experience AJP and i had yesterday while we were running 3.3 miles...i know cause i MappedMyRun. anyway...as we started off we were on the Detroit/Superior bridge heading west. a cop car is driving east and does a U'y right in front of us.

then immediatly stops next to the homeless-looking man walking towards us.
now, i don't know if he was homeless. he was wearing a yellow flannel shirt and had a scruffy beard. 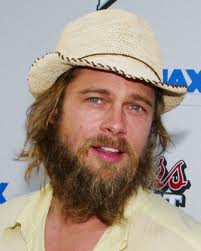 anyways the cops motion for us to stop so they can talk to him.
which made me a little nervous...was this guy gonna pull out a gun and start shooting and run away?

the cops asked for his ID then made him put his hands on the hood. Once they got the info they needed they seemed satisfied, apologized and let him go.

mistaken identity. not a problem.
but that means there is a homeless guy who kinda resembles a creepy brad pitt roaming the streets of CLE that the cops are after.
Posted by lara at 2:38 PM No comments:

ironically all three of these have something in common.
i will be doing all of them in the next month!

actually participating in derby has made me want to cook more. WHAT!?!
yes. i want to cook. however my current living arrangements really don't allow for a lot of cooking cause my kitchen is so small.


I decided to move. yep. i'll be an Ohio City resident starting in September.
with the move, comes a bigger kitchen...which i can't wait to practice plow stops in. and with that i thought...hmmm...if i'm in the kitchen i might as well cook.


so i'm gonna find a cute little apron, and A-Line dress/skirt and cook on skates. basically harnessing my inner Betty Draper. i think it will be good for me. maybe not so good for my cooking skills. either way, Derby is all i thought it would be. the ladies rock, the practices are so helpful, my body hurts and i have an awesome boyfriend to rub me down.

yep life is good. for now.
i still have to pack, move and pass my skills test. oh, and learn how to cook.

in the mean time. i'm going to my first ever Krusty's tomorrow.

We swim because we are too sexy for a sport that requires clothes.
– Author Unknown


back in the day i used to love the pool, Geauga Lake, Sea World, Cedar Point and Dover Lake. oh the memories.

i was on The Aurora Shores Sharks (yes, the ASS's) swim team for 10 years. well maybe only 9, the last year was spent skipping practice, giving the coaches a hard time, hiding under a pile of towels and trying to make sure my hair didn't turn green. 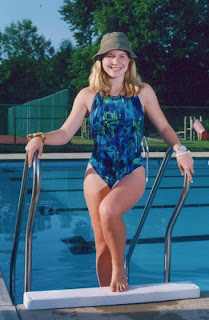 about age 16 (ftr, i loved my Gilligan hat)
This one time at Dover Lake with my cousins and brother, we were around the ages of 12-15, we took a break to get some food at our picnic site and decided to get into a food fight. twinkies, ho-ho's, twizzler's, crackers, you name it, if it was in arms reach we were throwing it. including garbage. juice boxes, apple cores, empty cans of pop...shudder...cans of pop.

My loving and newly engages cousin Kevin...i could smack him. i'd like to give him the benefit of the doubt and honestly believe he didn't pick up an un-opened can of pop and hurl it in my direction, but i think he knew what he was doing. long story short (to late) the can of pop hit me right above my lip. right across the Philtral Column. i still have a scar. my mom wanted to take me to the hospital. me, being deathly afraid of needles didn't want to go. so we left. day=ruined.

but that's not what this post is about. its about public water. now that i'm getting older, wiser and more mature (ha) i tend to be grossed out with public water. i'm convinced that every time i swim at the local pool i get a sinus infection. people don't realize that they should rinse off before getting in the pool. i don't care how many chemicals you use...multiple people are basically showering in the pool, water slide, lazy river. and don't get me started on Hot Tubs. i'd rather spend my time at edge water swimming in Lake Erie drinking a beer. or a Aurora Lake floating at Boater's Beach...drinking a beer. or at Mohican floating on a tube...drinking a beer.

a co-worker in my area recently went to cedar point and said he got water up his nose...now he is coughing and sneezing. just the thought of that stewing public water going up his nose almost made me gag. Sinus infection, nice to meet you.


so, how do you spend your summers trying to stay cool?

Sunday might have been the best day of summer yet.
it started off waking up at 8am...not hungover (cause i was lame and didn't go out for Steph's 30th birthday...sorry lady, hope you had a great time!) and i was able to take my time getting ready, eat breakfast, do a little stretching and hop in my car at 8:55.

i drove 15 minutes out to Euclid to Pla-More Roller Rink. i honestly thought it would take longer. but after getting there and realizing that it was Sunday morning at 9am...the only people on the road probably did the walk of shame to there car just a short time prior.

What was i doing at Pla-More Rink in Euclid?!? why, attending Fresh Meat August with the Burning River Roller Girls!

For the past 6 weeks i've been attending wRECk...which is the rec league for BRRG. i've been brushing up on my skating, learning to fall (small and correctly), playing fun games like Queen of the Ring and tag. and it all starts to pay off starting yesterday.

all 44 of us!
i officially met the BRRG Board and a bunch of other ladies that don't normally go to wRECk. and now my facebook friend request is going overboard! but i love it.

after Fresh Meat i booked it to my moms house in Aurora to go out on the boat. i waited for AJP and we hit the beach. had some beers and went wakeboarding on my neighbors awesome boat. then it was time to grab some diner. my mom made taco's. YUM.

the end of the night was awesome the BF and i watch some Mad Men, season one. (omg. i love this show!) and i surprised him with season two that a fellow Fresh Meat'er let me borrow. see derby is going to be awesome!

anyways. i'll keep you posted on my continually improving derby skills and mark your calendars right this second.

hope to see you there.
oh, and i might be doing a poll to pick a derby name.
stay tuned...


**note: wRECk is not directly affiliated with BRRG. They are more like cousins vs sisters. wRECk was started by former BRRG members and people use it to train for BRRG but there is no formal affiliation.
Posted by lara at 1:12 PM 1 comment: